The Beautiful Ring of Kerry

“On this famous scenic bus tour along the Wild Atlantic Way's Ring of Kerry the route winds over mountain roads, by sandy beaches, through villages with names translated from the ancient Gaelic language - names like Caherciveen, Derrynane & Sneem. You can expect stunning scenery surrounds which immerse you into Celtic Ireland. It is with good reason that the Ring of Kerry is one of Ireland’s most famed scenic drives & not to be missed!”

Departing around 09.30am we passed through Killorglin, where each year since pagan days a Puck goat is crowned as king & reigns over the 3 day "Puck Fair" (in August)! Nearby, we visited The Red Fox Inn & Kerry Bog Village Museum. The bog village is an award winning recreation of a rural 18th century Irish village. It was a very interesting visit that sent us back in time exploring thatched cottages, an old black smiths forge, a turf cutters house, stable dwelling &a dairy house.

Next we moved on our way for the seaside town of Rossbeigh & it was here that we got our first view of the ocean the along Wild Atlantic Way. Further on we made an optional stop to view Brendan Ferris award winning Sheep Dogs and his 10 breeds of sheep from around the world at work. It was an impressive exercise in precision work & a really enjoyable experience for the whole group.

Continuing from here we drove along a high cliff road over Dingle Bay which really show cased the meaning of Wild Atlantic Way! Then, sweeping back into the mountains, we drove onward to Caherciveen the birth place of Daniel O’ Connell. Our coach size was just the right to allow for a a visit to Cahergal Ringfort in Caherciveen. this was a great visit as large coaches can't make it down the narrow roads of the Ring of Kerry. So, we enjoyed the brilliantly restored examples of ancient Irish Ring Forts (admission free & quite)!

Near Caherciveen, beyond Ballinskelligs Bay we saw a craggy rock-islands known as the Skelligs. Sixth century hermit monks retreated there, carved stone steps to the summit & lived in stone beehive huts over 800 windswept feet above the Wild Atlantic ocean.

Driving on from Caherciveen we travelled on toward Waterville. Here we saw a place so loved by the actor Charlie Chaplin & so frequented by him that a statue was erected on main street in his memory. The picturesque seaside village is about half way through the Ring of Kerry & was an ideal place to take a stroll & eat lunch. 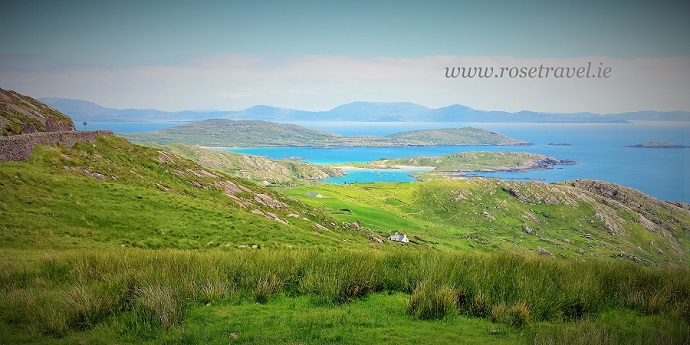 Coomakista Pass on the Ring of Kerry

After lunch, we boarded the bus again on our way to the remote award winning village Sneem. This took us up over a high mountain road, Coomakista Pass, where we enjoyed stunning ocean & land views to the south & north of the Ring of Kerry tour route.

Near by, we arrived at Derrynane Estate, Ireland's smallest national park. Luckily, we had a smaller bus that could gain access. It was actually the home of Daniel O'Connell, the "Liberator". Education was forbidden to Catholics under the Penal Laws so young Daniel was sent to college in France. There he saw the bloodshed of the French Revolution & was forever afterwards against violence. Using only his legal & oratorical skills he won Catholic emancipation for Ireland in the early 19th c. Almost every town in Ireland has a street named after him. The House is excellently restored & contained an interesting museum with many of his personal possessions on exhibit.

On the final stretch back to killarney we travelled up hill amongst Ireland's highest mountains, the Magillicuddy Reeks, we descended from Moll's Gap past Ladies View. So named because of the Queen Victoria's ladies in waiting who express their enjoyment of the location during a visit some one hundred years ago. We had plenty of photo stops along the way before continuing along the three "Lakes of Killarney" & into Killarney town. What a great bus tour; enjoying history, varied landscapes & ancient archaeology!!

Posted in Day Tour in Kerry.